Following on from the previous generation, which won the European Car of the Year in 2009, and sold over 30,000 in the UK last year, the Insignia Grand Sport is based on a completely new vehicle architecture. Its revised proportions result in a more spacious interior, giving the car a more athletic appearance and an improved road stance, including class-leading aerodynamics and Cd figure of just 0.26.

Like with the Astra, efficiency was key for the engineers. Optimised packaging and the use of lightweight materials have helped cut the weight by up to 175kg, allowing high-tech features such as the ultra-modern all-wheel-drive system with torque vectoring and the new eight-speed automatic transmission to exploit their strengths to the full.

There is a raft of top technologies that make driving the Insignia Grand Sport safer, more relaxing and more comfortable than before. Next generation IntelliLux LED matrix lighting, Lane Keep Assist, Head-up Display and unique AGR-certified premium seats, front- and rear-seat heating and a heated windshield are just some examples.

Outstanding infotainment and connectivity are also on board thanks to the latest generation IntelliLink systems and Vauxhall OnStar, which with the launch of the Insignia Grand Sport, will offer even more functionality for customers.

The New Vauxhall Insignia Grand Sport is available from your local Underwoods - Vauxhall Main Dealer in Colchester, Clacton & Tiptree in Essex or Sudbury in Suffolk.

The Monza Concept was the inspiration behind the interior and exterior design.

Despite a largely unchanged length compared to its predecessor, the new generation car has managed to shed around 60kg of weight from its body-in-white alone. In total, the new car weighs up to 175kg less than the outgoing model.

Its roof is 29mm lower and its track has increased by 11mm. The overhangs have been reduced considerably and the wheelbase enlarged by 92mm.

The prominent grille and the slim-line headlamps enhance the wide horizontal design of the front end and provide it with a bold appearance. The grille sits lower than on the outgoing model and further emphasises its solid stance. What Vauxhall calls a “sweepspear” feature starts in the front door and gives the impression that the Insignia Grand Sport is always ready to pounce, which is another nod to the athletic lightness of the Monza Concept.

The side window graphics feature an upper chrome strip, rather than a full-chrome treatment, and the coupé-like roofline graphically pulls the car down and emphasises its stretched appearance. The “blade” light catcher in the lower doors pulls attention rearwards. Clear and simple lines at the rear combined with the double-wing LED signature also give the car a wider appearance. The newly-designed high-mounted LED stop lamp has been integrated into the roofline. It helps to give the rear end of the Insignia Grand Sport a more high-tech look that is often found on premium brands. A further advantage of this sporty body design is that the newcomer has an exemplary drag factor of 0.26 making it one of the most aerodynamic vehicles in its class.

“In its proportions as well as in each detail, we wanted the new Insignia Grand Sport to deliver an upscale quality feel,” said Brit Mark Adams, Vauxhall/Opel Vice President Design Europe. “Its design combines flowing lines and subtle surfaces with crisp, precise lines to exaggerate its dramatic proportions: it looks longer, lower and wider than it actually is, and it definitely looks upscale. Every design feature conveys technical know-how and the utmost precision. The new Insignia Grand Sport is an excellent value proposition with the aura of a car from the premium, upper class.”

The attention to the smallest detail is also tangible inside the vehicle. Clean lines, pleasant surfaces and first-class craftsmanship also provide a feeling of elegance and lightness. The cockpit is fully aligned to the driver who sits 3cm lower than previously. In addition, the driver is integrated better and gets a completely new driving experience. The centre console provides additional support, the instruments face the driver and all controls can easily be reached. All this results in a position similar to the one provided in a competition touring car. The frameless touchscreen of the IntelliLink infotainment system exudes a sophisticated and technical charm. Furthermore, the system is much more intuitive to use than before. Apart from the driver, all other occupants of the Grand Sport also benefit from the new design and the reworked proportions of the car. The extended wheelbase gives passengers in the rear more space.

The Insignia Grand Sport will be available with a wide range of turbocharged engines and transmissions when it is officially launched next year. The highly efficient eight-speed automatic transmission is new to the line-up. It impresses with class-leading shift quality. The gear ratios have been extended and shifts are extremely smooth and hardly noticeable. Simultaneously the car accelerates eagerly – even at low engine speeds. The eight-speed automatic transmission, which will initially only be available in combination with all-wheel drive, is friction-optimised and improves efficiency.

Two electrically controlled multi-plate clutches replace the rear axle differential. For the first time, it will provide an all-wheel drive Vauxhall with torque vectoring – the best way to transmit power to the road, even if it is wet, icy or snowy. The vehicle receives steering impulses via the active, controlled torque distribution to the individual wheel. For example, when cornering, additional torque is transmitted to the outside rear wheel, enabling the Insignia Grand Sport to corner more precisely. The system reacts within a split-second when the accelerator is pressed, keeping the car more stable and easier to control in every situation.

The further improved FlexRide chassis provides the basis for optimal, situation-based driving behaviour. It adapts the dampers, steering, throttle response and shift points (on automatics) independently or based on the modes ‘Standard’, ‘Sport’ or ‘Tour’, which can be selected by the driver. Depending on the selected mode, steering and throttle response are more direct and the ESP anti-skid system intervenes earlier or later. The new central ‘Drive Mode Control’ software is the heart and soul of the adaptive chassis. It continuously analyses the information provided by the sensors and settings and recognises the individual driving style.

No other model in the segment offers such a wide range of intelligent technologies as the new edition of the Vauxhall flagship.

One of the highlights is the next generation of Vauxhall’s innovative and award-winning IntelliLux LED matrix light. It now has 32 LED segments – twice as many as in the Astra – that are all integrated in the new slimmer headlamps of the Insignia. The increased number of LED elements enables the various light patterns to adapt to the prevailing traffic situation even more precisely and the transitions between the modes are more seamless. This results in an improvement of both the quality of light distribution and light intensity. To improve visibility even further while driving through curves on full high beam, the engineers added a new function to the new Insignia’s IntelliLux LED matrix headlights. The light intensity at the inner matrix segments rises according to steering angle in order to increase the illumination of the curve. In addition, a further high-beam spotlight provides additional illumination at full high-beam for up to 400 meters.

Vauxhall is still one of the few manufacturers to offer seats certified by “Aktion Gesunder Rücken” (Campaign for Healthy Backs). The premium ergonomic seats in the Insignia offer a unique combination of side bolster settings, massage, memory and ventilation functions in addition to the standard setting possibilities. Passenger in the rear can also look forward to more comfort with the two outside seats being available with optional seat heating. Elsewhere, the heated windscreen guarantees good visibility quickly on cold winter days. In addition, keyless “Open & Start” comes as standard on all trim levels and enables comfortable access to the vehicle.

Great entertainment and outstanding connectivity, both typical for Vauxhall, are provided by the latest Apple CarPlay and Android Auto compatible IntelliLink systems. And while the smartphone is seamlessly integrated into the vehicle’s infotainment it can also be charged wirelessly without the use of a cable. The ground-breaking connectivity and service assistant Vauxhall OnStar is also on board, offering services ranging from Automatic Crash Response to Stolen Vehicle Assistance. A new concierge service will be launched together with the Insignia Grand Sport, enabling its occupants to ask OnStar advisors to select a hotel and proceed to room reservation. Furthermore, up to seven devices can be connected to the Wi-Fi Hotspot. 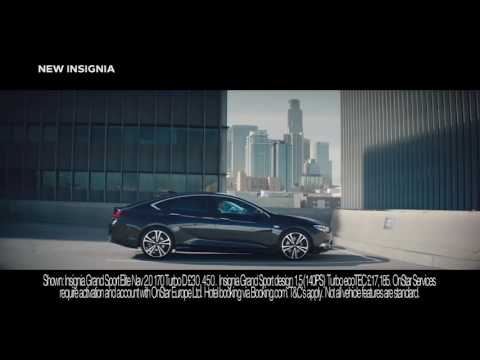 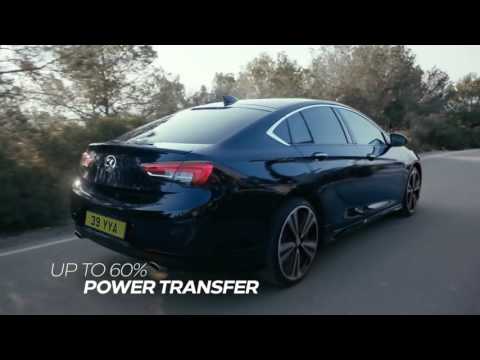 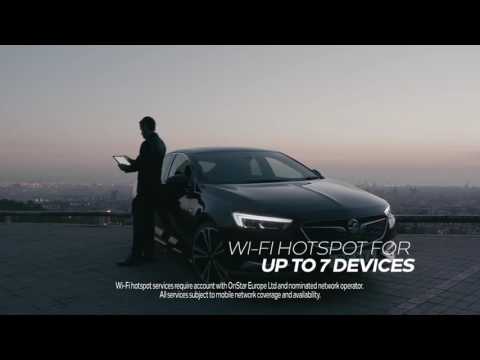 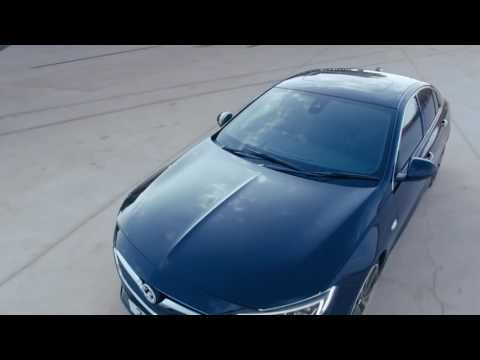 Back to Top
Make an enquiry
Back
Book A Service
Vehicle Valuation
Compare Saved Vehicles
Top
Close
Your Cookie Settings
Select your cookie settings
Strictly Necessary Strictly Necessary cookies are essential to let you move around the website and use its features, such as accessing secure areas, shopping baskets and online billing. These cookies allow our website to provide services at your request.
Performance Performance cookies collect information about how you use our website e.g. which pages you visit most often, and if you experience any error messages. They also allow us to update our website to improve performance and tailor it to your preferences. These cookies do not collect any information that could identify you - all the information collected is anonymous. They will not be used to target adverts to you on other websites.
Functional Functionality cookies are used to remember the choices you make, e.g. your user name, log in details and language preferences. They also remember any customisations you make to the website to give you enhanced, more personal features.
Targeting Targeting cookies collect information about your browsing habits to deliver adverts which are more relevant to you and your interests. They also measure the effectiveness of advertising campaigns.
Save Settings
Cancel Changes

Your settings will take affect when you refresh the page or move to a new page. Find out more about cookies